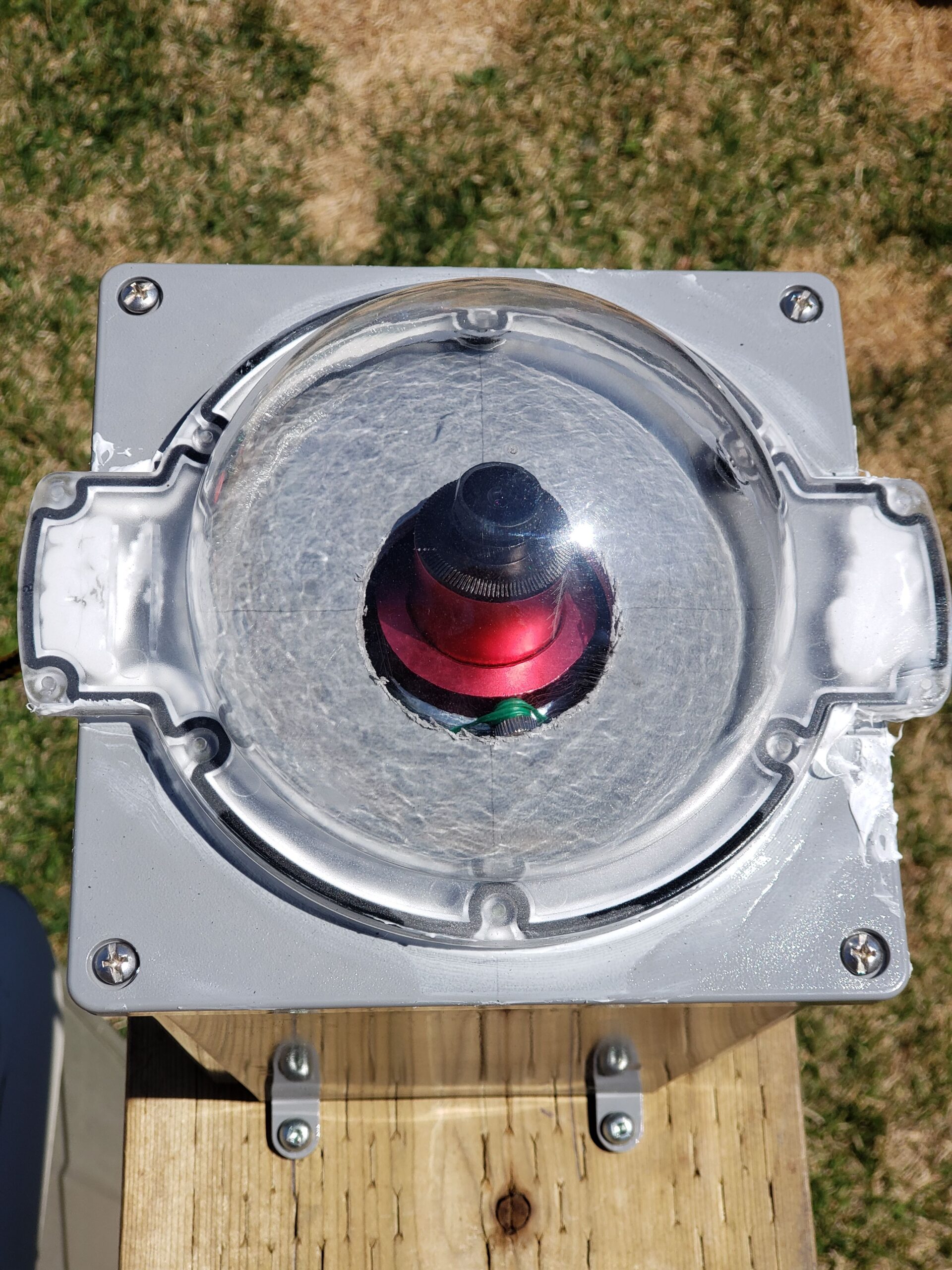 In early April 2020, I built an AllSky Camera using the information from Wireless All Sky Camera. This was really more of a “Macgyver” case of can I slap things together rather then a properly planned build like the author of that DIY had done. I was generally happy with this, but as we had snow I released a dome would have been better than a flat surface, though what really killed this design was a heavy amount of rain a couple of weeks ago that caused my camera to go for a swim. 🙁

After drying my camera out and confirming that it still works I decided I needed to put together a better containment unit for the camera. This post will walk you through what I did.

Above is a photo of the parts that I obtained to build this enclosure. The dome and fans I had lying around the house so repurposed them. The rest were:

The camera will point out the lid to see the sky so we need to cut a hole for it. My steps where:

This step was a bit tricky as my dome had six screws to place into the lid of the box and I had no easy template. My first step was to press the dome into a thin piece of cardboard to punch holes that I could then use as a template for marking the locations on the lid. This worked well even though it was awkward. Once I screwed the dome on to the lid I followed up with sealing the gap my lid had with silicon.

For mounting the camera I had a requirement in that I should be able to remove the camera easily. This way if I want to use it in my telescope during one night I can without having to hack the camera box apart. This is where the eye bolt comes in. Using the camera and the eye bolt I “eyeballed” how far down the box the bolt should sit (after determining the center of the side of the box). I was then able to secure the bolt using two nuts. Originally I planned to use the washers, however, the size of the washers would prevent the lid from sealing properly so I left them out.

The other thing of note was that the top part of the camera could easily fit in the eye bolt, but the bottom could not (my camera flares out slightly at the bottom). As I wanted the camera’s retaining ring to sit on top of the eye bolt I had to use a Dremel to widen the whole of the eyebolt to allow me to insert it from above.

With my original design, there was very little space and both the camera and raspberry pi would heat up. This box gave me more room so I decided to add a USB powered fan to the bottom of the box to expel air. This was accomplished by drilling holes into the bottom to allow the fan to draw air out. I opted for pushing air out as I wanted to minimize any outside particles (dust, seed, moisture) from being drawn into the camera box. The fan was secured using hot glue.

At this point, all that was left was to put the Raspberry Pi into the box and seal it up. I used some velcro tape to secure the Pi against the side and some green plant twine to help secure the camera to the eyebolt (the USB cable was pushing the camera up).

The box was now too large to sit nicely on the old patio umbrella post so I used some leftover decking material to build a support that can sit nicely on the post. This was done by using my hole saw to cut through multiple pieces of wood and then securing them together to give enough support to hold the new platform.

I am happier with this version as I am confident that the camera should not take a swim. The Pi no longer reaches 60C, although the Camera does come close. In hindsight, I probably should not have blocked the two overhanging parts of the dome as I doubt any water would have come in there and it would have improved the air exchange. Though I have plans to replace the dome this year as this one was a little scuffed up and there is a divot in the dead centre of it.

I am also thinking I may see about moving it to the fence so that it can: